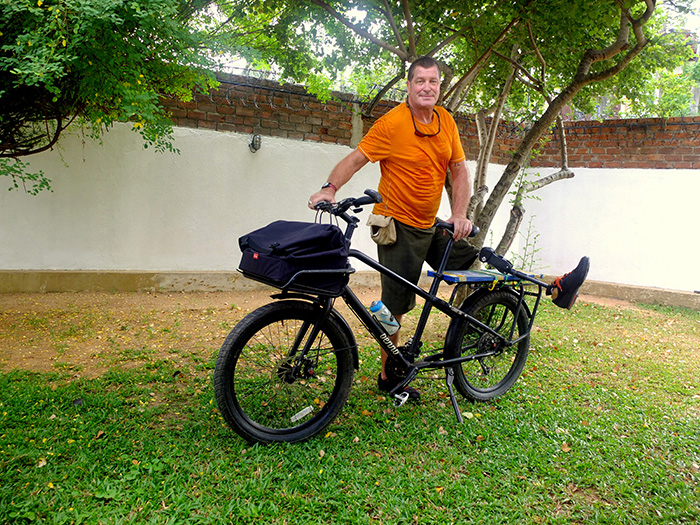 Freshly returned from a wicked ‘Me and My Mirror’ work trip to Sri Lanka, Myanmar and North Vietnam. Happily, a lot of it I was able to do by cargo bike. Lots of places I work, like the Middle East for example; doing it by bike is just not tenable. A lot of S and SE Asia is, however, is just built for bikin’. And for Me and My Work a cargo bike is the optimal solution.

I’ve now taken 3 different bikes on ‘Me and My Mirror’ work trips. The bike this time is made by an outfit called ‘BENNO’ and the model is a ‘Carry On’. And it is, by a wide margin and for me personally – and my biking/carrying/pleasuring needs – the best cargo bike by far.
It’s significantly more compact than any other variant I can think of, particularly if you consider that the robust rear cargo rack and the super-useful front ‘utility tray’ are removable. An added bonus is that it is far easier to plead it on to a plane or sneak it on to a train if you’re hot and you’re tired and you feel like cheating.

One size fits all… how about that? And I’m 6’1” (and fat despite everything).

Wheel size too, is a perfect balance: 24”. I’ve ridden cargo bikes with wheel-sizes all the way from 20 inch to 700c and the ‘Carry On’ sits perfect and purty on the balance between load center-of-gravity and riding like a real gen-you-ine bike. It’s tough as nails too, and I’m hard on the gear: 3 and one-half months on this trip and not one mechanical. Not even a flat (the stock tires are both cool and burly). 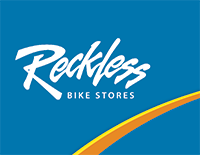 I’m stoked. She’s idling in the garage just now and champing for another voyage and Me and My Mirror has some big ideas.

Maybe Colombia in the autumn where there are plenty of amputees (many, tragically, due to ‘narco-terrorism’). The Benno will be a bonus in Bogota and thereabouts, but with that terrain and that altitude I’d best get fitter and lose a few lbs. Then how about the Balkans in the spring, then Kiev and the Ukraine, then on down to the Crimea, right? They’re hurting everywhere, and I got wheels.

I aim to carry on… and keep on carrying on. 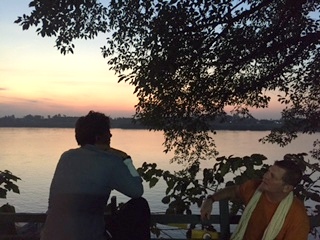 Just back from the experience of a lifetime. Nat Geo filmed me (and Me and My Mirror) as the central character in a 1 hour documentary on the tragic impact of UXO (unexploded ordnance ie: cluster bombs etc). Cluster bombs are among the ‘dirtiest’ munitions in the world; they fall out of the sky at random, are meant to explode on impact, are often filled with shrapnel and are designed to kill, or at least maim. In Lao almost 100% of the victims were innocent civilians.

Some Stats on America’s bombing of Lao:

It goes on and on. An important fact too, and something I only really realized (this was my 2nd work-trip there) is that cluster munitions (the Lao call them ‘Bombies’) were nowhere near the only thing they dropped. Everywhere in the countryside you find de-fused (one hopes) collections of: 500, 750, even 2000 pound bombs, and tons of other aerial military hardware fell from the sky. There is also a horrifying variety of ground munitions too, some of which is still live: rockets and mortars, landmines, hand-grenades etc. The US, in their wisdom conducted a proxy ground war by hiring mercenary Mong Lao soldiers to fight the communist ‘Pathet Lao’.

So all this evil stuff is still out there – some estimate that up to 1/3rd of the explosives did NOT detonate at the time. People still find it the hard way every year; very often children because they play with it; the bombies come in all shapes and sizes but nefariously look like toys. Lao has come a long way but is still one of the poorest countries on Earth, so other victims -the poor – include scrap-metal hunters and villages trying to re-use the ordnance for ‘dynamite fishing’.

Many, many of the victims – usually people on the perimeter of a detonation, the central figures get wasted – become amputees; they lose limbs.

Enter Me and My Mirror and enter National Geographic Explorer; it was a perfect marriage. I was keen to treat some people and draw attention to my work and its validity and Nat Geo wanted to draw America and the rest of the world’s attention to the terror of what was done and what continues to happen; the ‘Legacy of the Secret War’, so-to-speak.

I’ll post many more photos and anecdotes but I gotta hop just now and before that I need to thank – over and over – the fine people from Nat Geo: the producers (thanks Lucy and Leila!), the head camera dude (thanks Dane), the #2 camera (thanks Joe!), and the sound-guy, Mike the guy with the mike: Thanks. These guys are, after all, the best in the business and I am sure that the end result will be both beautiful and thought-provoking. There were an awful lot of locals who provided indispensable help too; both Lao guys (+ 1 super-beautiful girl) and ‘falangs’ or white dudes too. Thanks so very much to you all.

It really was the experience of a lifetime and I don’t expect an outfit of this caliber to call again anytime soon.

Lots more to come, including an air-date for the film.

Yours as ever, stephen

The Me & My Mirror back story from ConceptuallySpeaking on Vimeo.